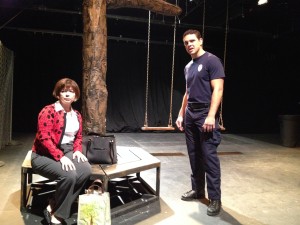 Synopsis:  Thirty three year old Stephen is in a drama filled relationship with fifty year old Rachael.  One of them is lying. 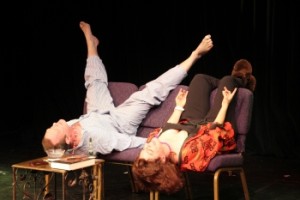 Synopsis:  What happens when a book on Feng Shui gets into the desperate hands of Alice, when enduring a dark night of the soul?

Feng Shui Fever, a 15-minute romp by Denver’s Nicolette Vajtay leads off, a near farcical jolt that would satisfy any aficionado of Christopher Durang’s or Neil Simon’s plays. In it a distraught writer (Elizabeth Kahn) faces down her own anonymity with a frenzied search for “chi” and other New Age solutions to realign herself with the universe and facilitate a career and personal rebirth. Happily, and in ways only found in romantic comedy, it works.” Posted by Terry Gibson

Synopsis:  Three old friends are brought together by the early death of high school classmate.  Even while mourning his death, and perhaps because of his death, new life paths and new loves are discovered.

Synopsis:  The death of their grandmother creates an opportunity for the boys, now young men, to heal their old wounds around their absent and estranged mother.